To Work on Being Zero Waste, We Have to Work on Homelessness

One of my favorite 1970s protest songs is “If You Don’t Like The Effect, Don’t Produce The Cause” by Funkadelic. My mental jukebox plays this song pretty often, especially when it comes to complaints about the litter homeless encampments produce. If you don’t like litter, give people homes- or at least access to basic services such a trash pick-up, recycling centers, and washing and bathing locations.

During the early months of the pandemic, a very visible homeless encampment was established at the end of our street, near Ocean Beach. Almost immediately, housed neighbors in the area began complaining about the trash the encampment was producing. But many were simply reacting to seeing trash, not the amount of trash itself. 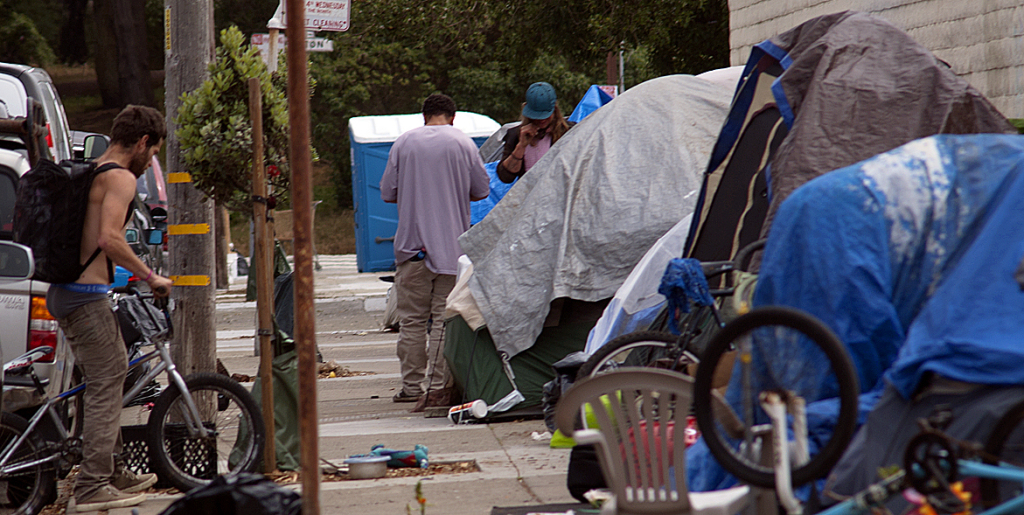 A line of tents stretches along 48th Avenue at Fulton Street, behind the Safeway on La Playa Street. A blue portable restroom can be seen in the background. Photo by Thomas K. Pendergast. According to the 2017 “State of Trash” report, the average San Franciscan produced 3.7 pounds of trash per day. The average housed person can put their almost 30 pounds of landfill, recycling, and compost into bins for weekly pick up. But the average unhoused person must rely on street cans that were not designed to hold that amount of waste, resulting in over flowing cans and litter. Including encampments on regular trash pick-ups could reduce “illegal” dumping and the litter it produces.

Additionally, access to recycling centers and buyback locations have been reduced throughout all of California, including the Richmond. This move makes diverting recyclable bottles and cans from landfill a challenge. Years ago, the Safeway on La Playa, where the initial encampment was, had a recycling buyback in its parking lot. Having the location near Ocean Beach and Golden Gate park was perfect. Vulnerable populations such as people who are unhoused, elder, youth or neurodiverse would often collect cans and bottles in these public spaces and receive money. Without the buyback program there, city cans often overflow on sunny days and there is little incentive for people to come collect cans and bottles as the nearest buyback location is on 25th Ave & Clement unless you have a vehicle. Also, there is little knowledge, outreach, or enforcement of the “pack out” rules Ocean Beach visitors are supposed to follow. By popping up at Ocean Beach, Race to Zero Waste hopes to start the conversation about how we can reduce waste and litter, which includes making diverting from landfill easier and provides economic opportunities.

Even more, our neighbors who are unhoused rely on single-use items for survival. With shelter spaces limited and 1 mobile shower station for the entire city, hygiene products, meals, and bottled water distributed by organizations like Salvation Army and Project Homeless Connect bring relief and dignity to folks living on the streets. But they do it within a municipal system that doesn’t give much consideration to how the waste generated by unhoused people should be managed, except to perform “sweeps.” Besides being inhumane, throwing away someone’s belongings is unsustainable. The sweeps do not reduce amounts of trash, in fact they increase it as unhoused people must replace those items. As an organization that promotes re-use and reducing single use plastics, Race to Zero Waste wants to share our message with everyone, including the unhoused. But in order to do that we have to advocate for better policies and build community between the unhoused and housed.

Photo Credit: Marria Evbuoma; December 24, 2020 near a homeless encampment and across from Safeway at Ocean Beach, SF. It is directly across where the buy back center once thrived.

Collaborating with Richmond District Rising, Value Culture, and Surfrider Foundation to support Project Homeless Connect, Race to Zero Waste wants to demonstrate the need for environmental non-profits connect with community groups and cultural organizations to make sustainability goals inclusive and actual. Sustainability should not be a privilege.

Because if you don’t like the effects of homelessness or being part of the cause, you need to support solutions created by the people and for the people most directly impacted.

Race to Zero Waste is a California Nonprofit Corporation exempt from federal tax under section 501(c)(3) of the Internal Revenue Service #83-3305529.